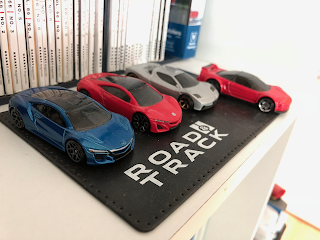 What do Hot Wheels, the XO Laptop, and Mozart's Nachtmusik have in common?  Each one appeals to the beginner and opens the door to something more complex.

There is a way of thought in Zen Buddhism referred to as "Beginner's Mind."  Approach activities with the mind of a beginner, even routine things such as eating.  That's because  "In the Beginner's Mind there are many possibilities. In the expert's mind there are few."

Mozart's Nachtmusik is a popular introduction for those new to classical music, whether as a listener or as a budding musician.  Listen to the clip above and you will understand better than any words I can write.

The XO Laptop brought the concept of computers and programming to children. especially in underdeveloped nations.   It did not succeed as planned, but the hearts behind it were in the right place.  The Verge (2018) recently took a thorough look back, accompanied by some sharp photos:

And then there are Hot Wheels, toy cars for the young and old.  Pictured above and in the distance is the original and legendary Acura NSX from 1991.

The gray one next to it is the Acura HSC.  A successor to the NSX in concept only, it never saw the light of day as the 2008 recession made Honda / Acura reconsider its debut.

The next red one also never made it to production.  Around 2015, the NSX-2 was nearly ready, but the designers wanted to give the car more power which meant adding a turbo, repositioning the engine from a transverse layout to longitudinal, and lengthening and widening the body to make room for the changes.

Finally, the blue one represents the NSX-2 that went on sale in 2016.  Click on the photo to zoom in, and you will see the new air intakes on the hood.

You can read more in Acura's online edition of APEX Magazine (2015):
The NSX Edition

Being a child at heart isn't exactly a "Beginner's Mind," but it's a start, and serves as a source of inspiration for whatever you do.