Google Fi for the iPhone 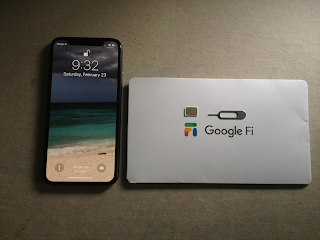 When Google Fi first rolled out, what was notable was its pricing scheme.  Paying only for bandwidth you use, the plan was well suited for light to moderate data consumers.  Unfortunately, Google Fi was exclusive to select Android phones, and as an iPhone user, I could only look on with envy... until recently.  Sometime around November or December 2018, Google Fi became available for iPhones, and I was ready to switch from my current carrier, VirginMobile.

When I signed on with VirginMobile, it started out as a great deal: "unlimited data" for $1 per month for the first 6 months, and then $50 per month thereafter.  The average monthly price over the course of a year came out to $25.50, but the longer I used VirginMobile, the higher the average price would be, and what began as a great deal would eventually become a bad deal, especially for someone who doesn't use much data.

Moving to Google Fi was mostly a matter of ordering the sim card, having an unlocked phone, and calling VirginMobile for my account number.  With VirginMobile, the account number was nowhere on my bills, nor was it anywhere on my online account.  This was intentional, as making me call customer service gave them a chance to keep me as a customer.  Fortunately, it was a soft sell, and I got my account number promptly.

In terms of connection quality, VirginMobile runs on the Sprint network. and signal strength was adequate for my usual travels.  Google Fi uses 3 networks -- T-Mobile, Sprint, and US Cellular -- and on select Android phones, would hop networks to provide the best possible signal.  On an iPhone, I am essentially a T-Mobile customer, as that is the default network, and there is no carrier hopping. Carrier hopping sounds cool, but so far, T-Mobile has been  sufficient for my needs.

Another cool but missing feature is the Google-run VPN.  It encrypts and routes cellular and wifi traffic through its VPN, offering additional security, especially for those banking over a public hotspot. While I would like to explore this, I can't say I miss this feature because, as a matter of security, I avoid doing any sensitive transactions on a public network.

What I do miss is the iPhone's Visual Voicemail.  It doesn't work with Google Fi, but Google Fi offers the next best thing: it sends you a text message with a pretty good transcription of your missed call.  The failing is in maintaining your voicemail-box.  You still need to call in and enter your PIN to review and delete messages, whereas Visual Voicemail lets you delete messages with a swipe of a finger.  Surely, a minor inconvenience, until spam callers make maintaining your voicemail-box a major nuisance.  The typical cycle is for spam callers to leave a message, static, or background noise, which I delete and then add their number to my blocked numbers list, to which the spammers rotate to a new a number and spam me again. This is really a problem for the FCC, but Visual Voicemail helped me cope with this annoyance better than Google Fi.

So the Google FiPhone isn't perfect.  There are minor compromises regarding carrier hopping, VPN, and Visual Voicemail, but the pricing plan makes it well worth it for me.