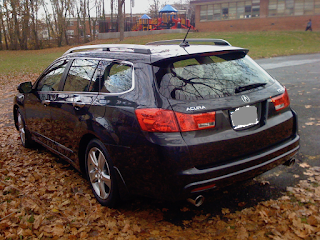 It's not unusual for computer people to also be car guys and gals.  Cars are another form of hardware to explore, test, optimize, and modify.  My TSX Wagon review below first appeared on Edmunds' enthusiast car website under "InsideLine: Readers' Rides."  Edmunds have long since changed their format and the article is no longer there.  I am republishing it here with a few updates.

First Impressions
My wife tells me the first thing women notice about men are their shoes. Shoe size not withstanding, she explains that the kind of shoes, and the condition they're in, say a lot about who a man is, and hint at what he hopes to be.

The shoes on our base trim 2012 Acura TSX Sport Wagon are 17 inch Michelin Pilot HX MXM4. In the Michelin lineup, these tires slot between the MXV4, which lean toward comfort, and the Pilot Sport A/S, which are geared for performance. Does this wagon live up to its luxury sport aspirations?

On the outside, the wagon's overall look is sleek and conservative. You'll find formal creases along the hood and the sides. Chrome door handles and chrome window trim give the wagon an elegant appearance, especially when paired with dark color. Sporty cues show up in the front with fangs on the chin spoiler, on top with aluminum roof rails, and at the tail with dual exhaust pipes and chrome finishers.

Interior
Stepping inside, the driver and passenger are greeted with blue foot-well lighting. The seating position is low, but the wide, perforated leather seats catch you comfortably on your way down. The leather wrapped steering wheel is soft and measures about 14.25 inches in diameter.

"Oh please, is that why you wanted the tape measure?" my wife asked.

None of that mattered to my wife. That the steering wheel was leather wrapped meant that it will feel not-too-cold in winter and not-too-hot in summer. Point taken.

The buttons, however, on the wheel and center stack intimidated my wife. "Too many buttons!"

My eleven year old son piped up from the back seat and disagreed. "It's not too many."

Acura could certainly use some help from Apple designers, but I find the buttons to be logically laid out. 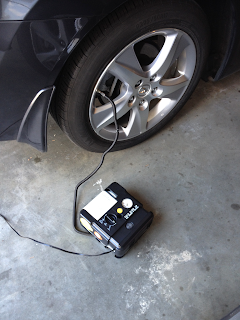 Rear seating is comfortable, but unless you're a kid, getting in and out requires a little turning and twisting. Folding down both rear seats gives my son access to the trunk, which he happily scrambles into. We meet him at the back and open the lift gate. With the seats folded down, cargo space is impressive at 60.5 cubic feet, but intrusions from the rear wheel shock towers might prevent us from making full use of that space. The rear cargo area has interior lighting, but it is still too dark when unloading at night. The lift gate should have lighting as well, so when raised, it would provide overhead illumination. A nice touch is that the lift gate has two grab handles, one for righties and one for lefties (my son is a lefty).

Worth noting is that the 2011 wagon has a temporary spare underneath the cargo floor, but the 2012 wagon trades it for an air compressor, netting more cargo space and some weight reduction. The air compressor has two modes – one to pump sealant and one to pump air. If that's not reassuring enough (it wasn't for me), the 2012 wagon also comes with 4 years road side assistance from Acura. And if you still prefer a spare (I'll consider it in 4 years), one is available as an option.


Performance
The wagon weighs in at 3600 pounds, and under the hood, there are 201 horses to pull it. This results in a weight to power ratio of 17.9. For comparison:

Ok, it's not an NSX, but power is adequate. There is, however, something under the hood that just makes me beam: a beefy strut tower brace! This means the wagon can corner with minimal body lean. 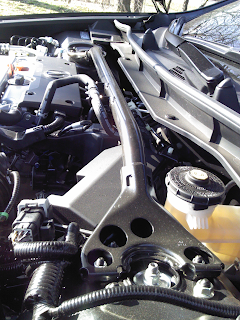 And corner it does. The excellent tires, the wagon's 53/47 front rear weight distribution, and the strut tower brace, let me take corners fast and flat, and can -- kind of, sort of, almost -- keep up with that MINI Cooper S on a twisty road. Okay, not really.

V-TEC kicks in at 5100 rpm, but peak torque arrives earlier at 4300 rpm, making the changeover less dramatic compared to say, V-TEC in an old Honda Civic.  Likewise, redline arrives at 7000 rpm, compared to a first-generation Honda S2000 which screamed to 9000 rpm.  Aspiring to be a well mannered luxury car, Acura tuned the wagon to have a broader torque band available on the left side of the tach.

Assuming the average take rate for manuals In the U.S. is 10% -- optimistic, but it makes the math easier -- that would mean Acura would need to set up a production line to manufacture a mere 321 wagons per year!

My wife who can drive a manual, doesn't miss it at all. Ignoring the paddles, she lets the automatic do all the work and finds shifting smooth and the throttle responsive. Combined with good road feel, a relatively quiet cabin, and remarkable visibility all around, the driving experience is quite pleasant. With more amenities than we thought we wanted or needed -- in the base trim no less -- the Acura TSX Sports Wagon is without question upscale and practical. But is it sporty luxury?

We think so, but some may argue the engine needs more power, that the transmission needs a 6 speed manual, and that the cabin should be even more hushed. Fair points to be sure, as a true luxury sports car should be powerful, effortless, and graceful. But that debate misses something very important about the wagon. Before test driving it, my wife had her heart set on an SUV or CUV. That the wagon won her over makes it truly special indeed.

- bluetooth occasionally gets amnesia, even with the TSB update. We've lost pairing information for an iPhone 4s as well as a Motorola phone running Android Gingerbread.
- the exterior windshield trim became unglued. This was fixed by the dealer at no charge.
- battery died twice. The dealer replaced it at no charge.

Kudos to our Acura dealer (Curry Acura) for being so responsive. We can live with a little bluetooth flakiness. The things that matter -- engine, transmission -- have been trouble free, and the driving experience remains a high point of the wagon.

Addendum 2/18/2019
The wagon now has over 86,000 miles.  Having upgraded our iPhones to the X, we still experience bluetooth problems and have given up on bluetooth connectivity.  Earlier, we purchased Yakima roof racks to transport bicycles; the low wagon height makes lifting bikes relatively easy.  We also purchased a set of wheels and winter tires (Michelin X-ice Xi3) from TireRack.  Lastly, despite have two flats caused by nails, we have not upgraded to a real spare tire; the air compressor and goo was sufficient. 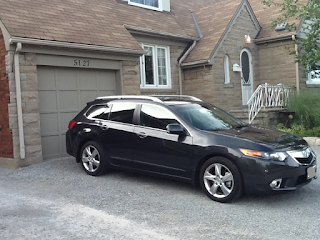