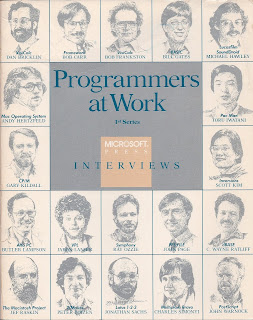 Where did that idea come from? How difficult was it to bring the idea into reality? What does it feel like to develop a major program?

Susan Lammers interviewed 19 programmers along these lines to capture and understand what spawned the microcomputer industry.  With such an eclectic group (click on cover image), Lammers touched on the popular platforms, languages, and applications of the day, including CP/M, BASIC, and VisiCalc.  She also explored the boundaries where programming met music, mathematics, and gaming.

One of my favorite quotes in the book came from the  conversation with Bill Gates where he talked about "technical inversions":

GATES: The old rule used to be that a manager of a programmer was always a better programmer, and there were no what we called "technical inversions," where a programmer works for somebody who doesn't know how to program. We still follow that philosophy: At certain levels we've got business managers, but we don't have non-programmers really managing programming projects.

This resonated with me as I often worked in places with technical inversions and found it frustrating,  Still, I imagine technical inversions would be hard to avoid in a large company.  At the time of the interview, Microsoft was small, with about 160 employees, compared with approximately 135,000 today.

Another favorite quote came from an exchange with Jaron Lanier:

LANIER: ... what we have wanted from life had to be got by manipulating physical matter. Now, we are just starting to organize our lives according to information. Eventually, our very experiences will be generated by information instead of the other way around. That will be the true information age.

Lanier was talking about shared virtual realities!  He was naive, though, about it not diminishing the physical world, but has reversed course with a recently published book Ten Arguments For Deleting Your Social Media Accounts.

In the Introduction to Programmers At Work, Lammers suggested that there would be subsequent books, that there would be, in her words, "a continuing series of discussions with outstanding programmers of our time."  Sadly, that never came to be, but perhaps, that was inevitable.  Lammers chose a particular time period and a specific set of individuals, and magically captured a fragment of light from the big bang of microcomputers.  Anything afterwards would be anti-climactic.


This book is out of print, but available for borrowing on the Internet Archive.