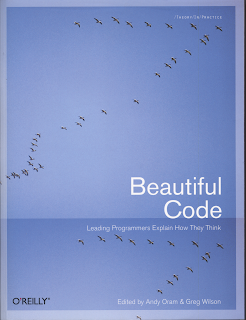 This book is what you get when you ask 38 top software developers "What is beautiful code?"  An open ended question, you get diverging answers such as a deep dive into a regular expression matcher from Brian Kernighan, an optimization of population counts from Henry S. Warren Jr. (for bit-heads, not sociologists), and a treatise on why code is better treated as an essay from Yukihiro "Matz" Matsumoto.

For this post though, I want to focus on Jon Bentley's contribution, curiously titled "The Most Beautiful Code I Never Wrote."  Elaborating, Bentley writes

He then uses the Quicksort algorithm to illustrate his point, first reviewing the code, instrumenting it with counters, and optimizing it along the way.  But the pressing question he tries to answer is: "How many comparisons does Quicksort make, on average, for a random array of size n?"

One could generate large samples of random data, make several trial runs, and get an average, but Bentley takes a different route, a code-less path that crosses into mathematical proofs.  I didn't find it easy to follow, and got help from a talk he gave to Google in 2007: Three Beautiful Quicksorts.

In the end, Bentley derives a completely mathematical analysis of Quicksort's behavior.  It's wonderful.  It's frustrating.  It reminds me of an old joke:

A hungry man walks into a diner and sees the special is a Ham Sandwich.  "Nothing would be better than a ham sandwich!"

The waitress returns with an empty plate.  "What's this?" the man asks.

She replies, "You said 'Nothing would be better than a ham sandwich.'  So I gave you Nothing."

The piece doesn't fill the belly, but it does move the mind.

For more on Bentley's work, see my review of his book More Programming Pearls.

"Raspberry Pi BogoMIPS is dynamic!" is something I imagine SpongeBob might say. Here he is, atop a Lego enclosure, and in the role of sysadmin for my Raspberry Pi Model B (circa 2011).  The term BogoMIPS means "bogus millions of instructions per second," and provides a rough speed rating of a Linux system compared to an early model IBM PC. You can determine your BogoMIPS with the following command: $ grep Bogo /proc/cpuinf o The early versions of Raspberry Pi calculated BogoMIPS once at boot time, and mine showed 2.00, which I took to mean it ran twice as fast the reference PC.  Later versions of Raspberry Pi showed the actual cpu frequency: 697.95 (700 MHz was the rated frequency). With recent versions of Raspian -- Buster and the just released  Bullseye -- I discovered, to my delight, that BogoMIPS was calculated dynamically based on the cpu load.  I tested using the Raspberry Pi 400 , which has 4 cores.  At rest, the Pi produced these values: BogoMIPS : 108.0
Read more