Lunch Time for a Programmer 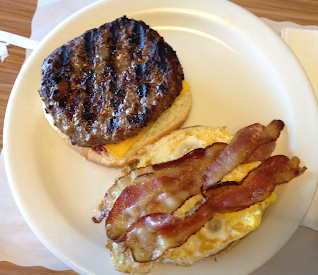 Lunch time. It was raining, and the company cafeteria was crowded. Waiting in line at the short order station, I overheard the cook remark how busy the place was.  "It's because of the rain," I interjected.

She was right.  I smiled and offered my only defense: "But I'm a computer guy."

This was little better than the rude waiter who defended his behavior as just being "French."  And yet, if you think French waiters are rude, try talking to a sysadmin.

In general, our straight-forward nature and disdain for embellishment give our managers an honest assessment of the state of a project. That's a good thing.  But in every group, there is a statistical outlier -- the "that's easy" computer person. That's a bad thing.  One project manager shared the time a developer fixed a bug and declared, "It was easy. Just one line of code."

Being a seasoned manager, he knew better.  But too often, the outlier carries more weight with management than deserved.  That's because sugary optimistic schedules work on managers in the same way as compliments and blueberry muffins work on developers.  When two internal groups competed for a project, the group that won promised completion in two weeks, whereas the group that lost estimated the project would take two months.

Two weeks later, the winning group delivered a terrible, half-baked effort, but their spin was that at least they delivered something, even if it was crap.  The other team, they argued, would have delivered nothing (in the same time period). This wasn't a case of "don't let the perfect be the enemy of the good."  It was more akin to "as long as we value crap over than nothing, we will always have crap."

I don't recall how my conversation with the cook ended, but I have taken her observation to heart. Indeed, rain leading to crowds was a linear, cause and effect, way of thinking. The burger did smell good, and it wasn't a lie or an embellishment to say so.