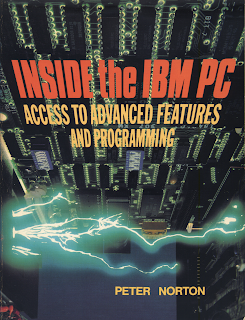 Answer: Hex B000
Question: What is the starting video address for the IBM monochrome display.

Answer: Hex B800
Question: What is the starting video address for the IBM graphics display.

August 12th marks the 39th anniversary of the IBM PC, making it a good time for a nostalgic look at Peter Norton's book, Inside the IBM PC. Before computers became personal, they were large machines housed in refrigerated rooms and guarded by stern, but good wizards in the tradition of Gandalf or Dumbledore. The PC, in contrast, sat on my desk, and without a gatekeeper, allowed me to explore, experiment, and crash the machine to my heart's content. Norton served as an excellent guide, and while the contents are mostly the stuff of trivia today, the book opened up a new world for me back then.

Of course there were other personal computers from that era, such as the Timex Sinclair, the Commodore 64, and the Apple Macintosh. All legendary machines, the IBM PC had the distinction of getting its boot disk in the door of corporate offices. And the rest is history.

While the story of the IBM PC is well documented, the man, Peter Norton, remains a bit of a mystery. He wears button down shirts with his sleeves rolled up, and his name appears on the Norton Utilities, a software suite designed to protect and fine tune your PC.

The preface in his book tells us a little more:

Peter Norton grew up in Seattle, Washington, and was educated at Reed College. He has labored in the various vineyards of computing for the last twenty years¹ with time out to teach medicine in the Army, to study for five years in a monastery, and to back-pack around the world. Mr. Norton lives on the beach in Venice, California, and always wears his shirt sleeves rolled up.

A search on the internet turned up two notable articles.  In 1994, the Los Angeles Times described Norton's success, and his quiet path to family, art, and good deeds as a millionaire.


In 2014, Harry McCracken of Technologizer blogged Where Have You Gone, Peter Norton?