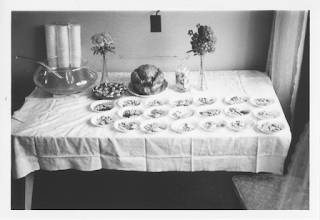 As difficult as 2020 was, and still is, for many of us, I think we can all find something to be thankful for. We might just have to look a little harder. And do it apart.
Below is an old Yam joke circulating on the internet. Those who like bad puns will enjoy it most, but I hope it brings a smile to every reader.
A girl potato and boy potato had eyes for each other. They eventually got married and had a little sweet potato, who they called "Yam."

Of course, they wanted the best for Yam, and when it was time, they told her about the facts of life.

They warned her about going out and getting half-baked, so she wouldn't accidentally get mashed, be called "Hot Potato," and end up with a bunch of tater tots.

Yam said not to worry; no spud would get her into the sack and make a rotten potato out of her!

But she wouldn't stay home and become a couch potato either. She would get plenty of exercise doing potato rolls as she was determined not to be skinny like her shoestring cousins.

On a trip to Europe, Mr. and Mrs. Potato cautioned Yam to watch out for the hard-boiled guys in Ireland, and the greasy french fried guys in France. They also told her not to associate with those high class Yukon Golds, and to also avoid those from the other side of the tracks who advertise their trade on all the trucks that say "Frito Lay." They're only interested in potato skin!

Yam attended a popular university in Idaho, studied hard, and got a job at what Mr. and Mrs. Potato calls a blue chip company. "That's Terra Blue Chips," Yam corrected.

One day, despite all they did for her, Yam came home and announced she was going to marry Tom Brokaw.

Tom Brokaw! Mr. and Mrs. Potato were very upset. They told Yam she couldn't possibly marry Tom Brokaw. "But why not?" pleaded Yam.

"Because, because...." Mrs. Potato had tears in her eyes and could not finish. Mr. Potato took root, and said "because he's a Common-Tater."