Bookshelf: UNIX A History and a Memoir 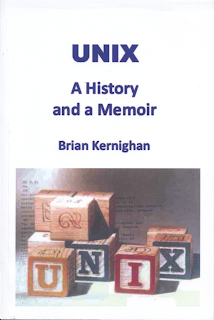 A man page will give you, in black and white, specific information about UNIX. Brian Kernighan's new book adds color and depth about UNIX you won't find anywhere else.
I'm not a gray beard (yet), but I imagine they would plow through the book knowingly, but at the same time, learn a few things. Those new to UNIX -- recent college grads or those experimenting with Raspberry Pi -- would be better off starting with Chapter 8 which describes more relatable events and the descendants of UNIX, including Minux and Linux. It's when they start to ask questions like "Where does UNIX come from?" and "Why is Gamora grep?" that they should start from the beginning: Bell Labs, 1969.
Kernighan opens with a birds-eye-view of Murray Hill New Jersey, zooms in on the buildings, the offices, the significance of Center 1127, and offers a brief look at some of the key players there. As I progressed through the book, the two factors that made UNIX not just possible, but brilliant, became obvious. The first was in the words of Doug McIlroy, the researcher who worked on memory allocation and got Kernighan focused on programming:
"Collegiality was the genius of the system. Nobody's advancement depended on the relationship with just one boss."
This was about sharing information and sharing judgement among competent peers.
The second was in the copious pranks they played on one another and on management. Kernighan doctored his official badge to show Mickey Mouse's face -- not the cheerful one, but one with an alarmed expression. A truly epic prank involved the face of Peter Weinberger, a department head in 1127, being painted prominently on the company water tower in the style of the AT&T "Death Star" logo. The image was painted over within a day or two, but lives on at the website PJW's Face.
The theme of playfulness mixed with mutual respect ran throughout the book. At the same time, Kernighan recognized the importance of good management (he was a reluctant department head for 15 years):
"... one positive role of management is to be cautious most of the time, so that people who want resources are forced to hone their proposals and focus their pitches.  If resources are tight, that's more likely to lead to well-thought-out work than if there were no constraints."
Indeed, common advice to businesses (and especially to startups) is that too much money is more dangerous than too little.
As AT&T was broken up, the contributors to UNIX scattered into the wind. Many joined Google, while others went on to teaching positions at universities. The important take-away is that to make great software, you need to create an environment that's both collegial and fun. Unfortunately, I've found this difficult to accomplish in modern times -- especially in Wall Street companies where bigger is better, serious sounds smart, and more means... well, more. Kernighan closes his book drawing a similar conclusion but from a different (research) direction:
"... there are few unfettered environments, industrial research is much reduced and constrained and far more short-term than it was fifty years ago ..."
But he remains optimistic because great ideas come from individuals. I myself am similarly hopeful. Working with a colleague, I casually mentioned "that I don't take myself too seriously."  Right on cue, he replied, "That's okay Mike. We don't take you seriously either."
We chuckled, satisfied to know that we took our work seriously.

hectorhector said…
Hi, I saw your post on the Youtube video of Penn and Teller's prank on Arno Penzias. I'm finishing up the book now, and enjoyed your review. Thanks!
9:46 PM

Michael Yam said…
@hectorhector - glad you enjoyed the review! As you can tell, my favorite parts of the book weren't necessarily the technical or historical aspects, but the jokes they played on one another.
12:41 PM 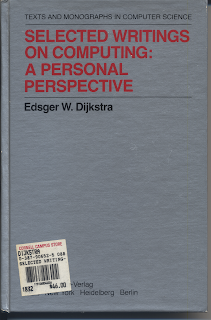 I first heard of Dijkstra from one of his quotes condemning the BASIC programming language: " It is practically impossible to teach good programming to students that have had a prior exposure to BASIC: as potential programmers they are mentally mutilated beyond hope of regeneration. " I couldn't help but smile, and while I easily agreed, I wanted to know more about his thinking.  Dijkstra's full essay can be found in his book Selected Writings On Computing: A Personal Perspective . (See chapter EWD498, or go online .)  Titled "How Do We Tell Truths that Might Hurt?" his criticism extended to other languages such as FORTRAN and COBOL, and even to PL/I, a language I sort of liked :  "PL/I —'the fatal disease' — belongs more to the problem set than to the solution set." Ouch. Dijkstra's tone was understated humor -- less to make you laugh and more to have you reevaluate some of the norms in computer science. Keep in mind that this essay
Read more